Inside Out: A Coaching Conversation With Myself, Part 3 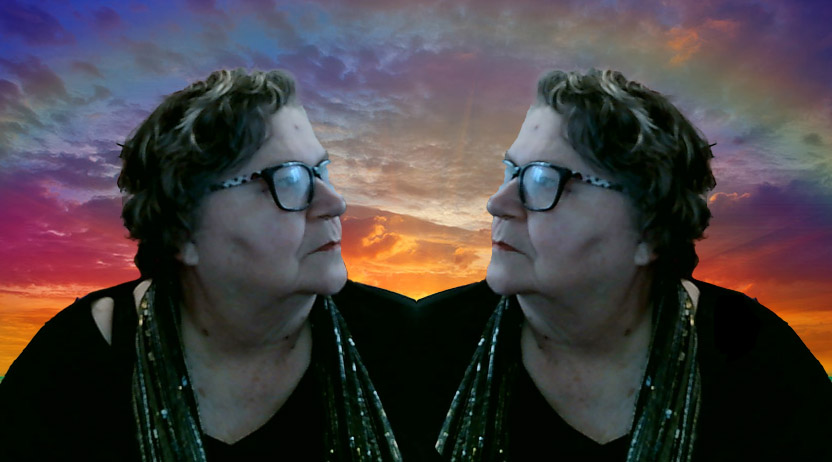 Well, well, well. What a wild time this has been since my last Inside Out post.

This post was to be about my Meaning Maker Machine (M³) and how it works. The internal dialog I had with myself uncovered a whole new level of crap to deal with and I have been working my way through it. Angella Johnson has a really great piece of advice here when she says write from the scar, not from the wound.

Here’s what came out of my explorations. But first, let me tell you about the M³. 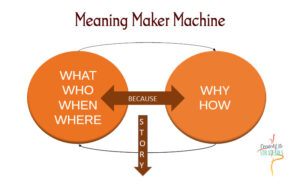 I created the Meaning Maker Machine in 2004. It’s really pretty cool, if I do say so myself.  It’s based on the concept of pareidolia, or pattern perception in human beings. Human beings are hardwired to find meaning in randomness. If there isn’t a meaning provided when an event takes place, we’ll make one up. And that made up concept (story) becomes personal dogma as we forget we made it up in the first place.

The purpose of the Meaning Maker Machine is to help disassociate the emotional, made up story from the facts of the event.

The way it works is, you plug in your story, you answer the questions:

These are the facts. They can be absolutely proven. The next part is your story. This is where the emotion lives, the pain and the suffering.

The process becomes mechanical when you start answering the emotional side with the factual side and vice versa. For example, in my case:

Here’s where it gets interesting:

Once more with feeling

And around we go again with a different story, uncovered by the first level

And there are lots more stories. But you can see how you can drill down into a whole lot of dark space as you go around and around the machine. I’m not afraid to go deep and I did. About the fifth level through this, I started remembering things; hurtful, painful things that I had buried and compartmentalized.

There’s something known as Betrayal Blindness. Betrayal Blindness is the unawareness, not-knowing, and forgetting exhibited by people towards betrayal (Freyd, 1996, 1999). This blindness may extend to betrayals that are not traditionally considered “traumas,” such as adultery, inequities in the workplace and society, etc. Victims, perpetrators, and witnesses may display betrayal blindness in order to preserve relationships, institutions, and social systems upon which they depend.

What I uncovered and what I had buried so many years ago was that when I was molested at age 7, instead of holding me close to comfort me or support me, my mother made it clear she believed it was my fault and that I was now dirty and unfit to be her child. And she threw the event in my face whenever I tried to spread my wings or explore any independence. I remembered the event, but not the fact that I’d felt betrayed when she blamed me. At 7 years old, I had no concept that a man who my parents had trusted to be around me since I was a baby would do something that was wrong or hurtful to me. I never understood, at that age, why I was now considered garbage and unworthy.

I realized just how irreparably that trust bond between a mother and daughter had been broken and how deeply it wounded me. I was present to just how I had created the story that it was me who had done something bad and now had to work very hard to have her love me again. At 7 years of age, I began to believe I was unlovable and unforgivable.

This is where my favorite 4 words that have become my personal anthem come into play – “and it’s all bullshit”!

I made that betrayal story up. It was hurtful and traumatic. I wallowed in the drama of it for years. It no longer served me, it actually never did, but there obviously was some sort of a payoff or I would have shed it a lot sooner. But here’s the story I have created now to replace it. 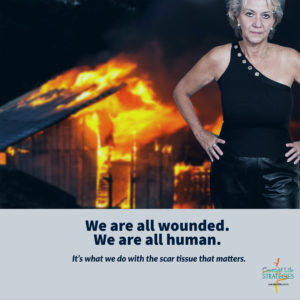 Here’s where I get to rewrite it:

I no longer feel blame or shame about what happened. I was a 7 year old kid and my parents reacted badly. In case you’re wondering, I never had reason to doubt my father; he just wanted to kill the guy and let me know he still loved and cared about me. He was always the nurturer. It was my mother I felt I needed to placate and win back.

Any of our stories can be rewritten to empower ourselves instead of tear ourselves down. The “BECAUSE” in the graphic comes into play when we start to assign a causal relationship between the facts and the emotions. Oughta Pilots live in BECAUSE. They’re often created out of our stories.

Until next time – why not run some of your own stories through the M³? If you need any help, you know where to find me.