The Joys of Failure 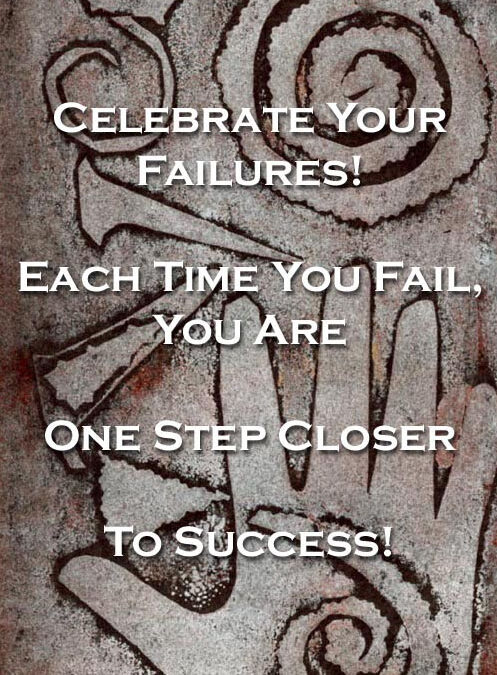 If you don’t count your failures, everything in your life is a complete success.

I’ve been seriously rethinking my views on just what failure is and is not. I’m putting together a talk on the above subject and it’s made me think a lot about my life till now. I realize that I am now and continue to be an amazing failure!

Not being what other people think I should be has given me the freedom to explore my life and my opportunities in different, innovative ways.

Not thinking the way other people think I should think has given me the freedom to explore self-education, alternative education and to have my education actually serve my needs.

Not looking the way other people think I should look as given me permission to be a unique individual with my own style and my own likes and dislikes.

Most of the dictionaries and 99% of society think of failure as a bad thing. I don’t happen to share their opinion. How can you possibly succeed if you don’t know how to fail? How will you recognize success then? How can you tell if you’d made it?

I have been able to pick and choose everything that I do. I live a Created Life and I am so blessed because I choose and I take responsibility for everything that happens in my life. Not thinking the way other people think allows me to self-educate myself and find things that apply to my life, to what I want to do, what I want to do for others, whether those things are predictable or not. I’ve never really been one that likes to stay to well-traveled paths.  I like to go start my own.

Not looking the way other people think I should look has given me a chance to really expand in the area of creativity. I not only work outside the box, I blew it up and threw the damned thing away!

A lot of people think failure is a bad thing. I don’t happen to share that opinion. To me, failure is a part of succeeding. How do you know you’ve succeeded unless you have failed? Failure is the fine art of falling on your face and getting up again.

There once was a young boy. His parents thought he was substandard. His teachers told his parents that he’d never amount to anything. They said he was retarded, that he was not able to keep up because he couldn’t read until he was seven. He didn’t speak until he was four. The man was kicked out of one school and refused entry into another because of his substandard mentality. The man’s name was Albert Einstein,

Thomas Edison. When asked, how does it feel to have failed a thousand times to invent the light bulb said, I didn’t fail. The light bulb was an invention that took a thousand steps. Failure is not a wall. Some people stop when they fail. They try something once and it doesn’t turn out how they want it to/ They tell themselves, “Oh, I didn’t do it”.  So that’s it. They stop trying.

I say, failure is nothing more than a bump in the road. If you trip and fall, dust yourself off, get up and start over because everything is one step at a time. And when something doesn’t work, try something different to get to the same thing. What you need to do is focus on what it is you’re dreaming of, what it is you hold dear. So dear that you’re willing to risk everything to get, and you hold onto that. Then, anything that comes up in your way will not stop you. It may detour you but keep going.

If you say for instance, you want to paint a painting and you’ve never even touched a tube of paint in your life, or if you’re a painter and you want to try quilting and you’ve never done it before, you wouldn’t know how two pieces of fabric go together. Your life doesn’t depend on it, go try. You might surprise yourself. And if you fail, your life is not going to end just because you didn’t get it together. Perfect failure is a joyful measure of how you live your life.

When I fail at something, I rejoice and I think, well, what was I supposed to learn here? Because with every failure or lack of achievement if you have a goal and you don’t make it on the first try, all that is is a chance for you to, re-examine your commitment. Were you really, really committed to that? You hear a lot about the Law of Attraction, and you’ve heard about how your mindset brings what you think about most to you.

Remember that negativity is something that you can also create because what you resist persists. That thing you don’t want is what you’ll get, because you spend all your energy on it. Now you get a chance to perfect how you’re thinking about that goal, that dream, that vision. How do you see yourself attaining that goal? Are you there rejoicing that you have achieved it, or are you still on the path to get there? You need failure to give you an opportunity to examine that.

I had a goal. I wanted to be 150 pounds. Obviously. I didn’t make it not last year, not this year. That doesn’t mean I won’t make it next year, but I want to share something with you. There is this word that I absolutely detest. It masquerades as a verb. And that word is try. There is no way to try. You either do or you don’t. Yoda was right. And what you attach to the don’t makes all the difference in the world. You either succeed or you fail. These are  just words. They don’t mean you’re a bad person. If you fail, they don’t mean that you weren’t committed. The word doesn’t mean anything unless you make it mean that when you go home.  I’d like you to do a little experiment,  I want you to try and pick up a pencil and only try it.

Don’t do it or not do it, but just try and see how difficult that is because it’s not even a passive verb. It says it’s a verb because, you know, verbs convey action. Well, there’s no action in trying. The only way you try is stand still, you never move forward. You’ve never moved backwards. You just stand still. Paralysis is another word for trying in my book.

Think about your dreams. Think about those dreams that you had when you were little. I mean, when you ask a five-year-old what they want to be when they grow up? They are not in any way, shape or form limited by what their world is doing right now. This is what’s possible in the future. Anything is possible to a little kid;  be a little kid again, and enjoy the, the thrill of possibility because within possibility is where you succeed. If you get a little bump in the road,big deal, step over it and keep going.

Go try something you’ve never done before. Give yourself permission to fail. That way, you get a lot more joy when you succeed! After all, if you’ve never done it before, you have nothing to compare it to and you are the one who will decide whether you’ve failed at all! Failure is all in YOUR mind. How many people do you know that blow off compliments saying that they could have done better and then list excuses? Especially when they’ve done something you are aching to just achieve a 10th of? It’s all relative and it’s all so very personal.

I give you permission (if you need it) to go try something new this next week. Something you’ve never done before and know nothing about. Go ahead,
have fun.